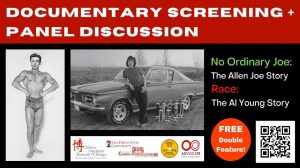 Following the screening, there will be a panel discussion with filmmaker Rick Quan, drag racer and subject of the first documentary Al Young, and Bruce Lee collector Jeff Chinn, whose collection will be featured in an upcoming exhibition at the Chinese Historical Society of America. The discussion will be moderated by Larry Lee, Professor at the School of the Art Institute of Chicago. This includes a Q&A section and a chance to chat directly with the panelists! The documentaries are both 21 minutes long and in English.

Rick Quan is a two-time Emmy award winning broadcaster with more than 30 years of local television experience. He started Rick Quan Productions in 2008 and has produced videos for numerous non-profits, including the Chinese Historical Society of America and Kristi Yamaguchi’s Always Dream foundation. Rick is currently the 10pm news anchor for the ABC affiliate in Honolulu, Hawaii. He has produced the award-winning documentaries, Dancing through Life: “The Dorothy Toy Story” and “Mayor Ed Lee”.